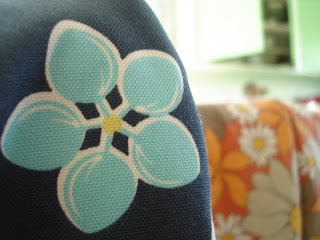 My week of selfish sewing can only be described as a disappointment.  And it all started out so well.  In fact, to figure out where it all went wrong, its best to start at the beginning.  I found this awesome link with heaps of Free skirt patterns.  I was so excited to be sewing something for myself.  I had some fabric that I bought a little while ago specifically for me.  But this is where it all started to unravel.  I was so excited that I jumped right in and cut out a skirt without drafting a pattern first, or really thinking about what I wanted from the skirt - something I could wear to work.  I did end up with a skirt, but it isn't what I wanted at all.  I made several mistakes when I measured my hips, so ended up with a skirt that was far too large for what I had in my head. 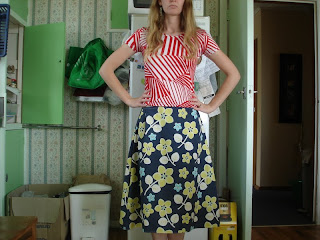 I tried my best to fix it up, by taking it in around my hips, and then adding a pleat to the front, but now I have a skirt which is still too large, and also now sits funnily on me.  As DH would say, epic fail. 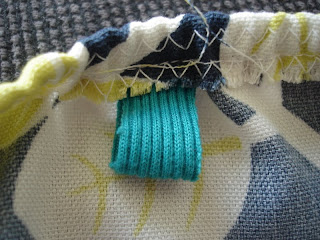 The tag that I made is probably my favourite part.  In fact it is so not what I intended, that I will have to redo it at some later point, which is a waste of my time and the lovely fabric.

So yes, disappointing.
Posted by Mummyzilla at 4:17 PM

Labels: one project a week, sewing